High Wycombe is On The Monopoly Map

High Wycombe joined the Monopoly Map this week as the NEW ‘High Wycombe’ Edition of Monopoly released. Featuring local landmarks, businesses and charities, every corner of the town was represented.

An official launch was hosted by the Monopoly team at the Wycombe Arts Centre, with a sparkling ‘Money, Money, Money’ musical showcase from the Jackie Palmer Stage School Dancers, before a copy of the game was presented to all organisations featured on the board. 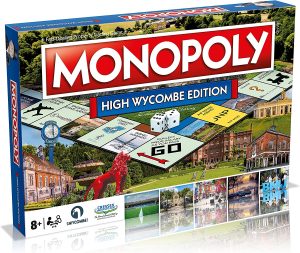 HWBIDCo held its own celebration on the High Street, with a GIANT Monopoly Board to set the scene for the perfect selfie with Mr Monopoly, as well as his classic top hat & cane as props. There were also copies of the iconic High Wycombe-themed game up for grabs, with a ‘Monopoly Tombola’, inviting players to ‘Find The £500’ note, in order to win a prize. Hundreds of participants walked away with treats, with 1 lucky winner receiving their very own copy. Proceeds were collected for the High Wycombe Shopmobility charity, with a fantastic £260 raised for donation.

HWBIDCo Chief Executive, Melanie Williams bagged her own copy for playing with friends over the festive season, “It’s great to see High Wycombe represented in such an iconic way, and a real coup for the town to be included in the prestigious list of Monopoly locations, especially with so many local organisations featured. It’s very exciting for us to have been a part of this process and I know it’ll be a hit with the High Wycombe audience – I can’t wait to have a play, but I will definitely be playing to win!”

High Wycombe Monopoly is available to purchase online, as well as local stores including WHSmith on the High Street, and Waterstones, Toys UK and Collectibles in Eden Shopping Centre. Prices may vary.