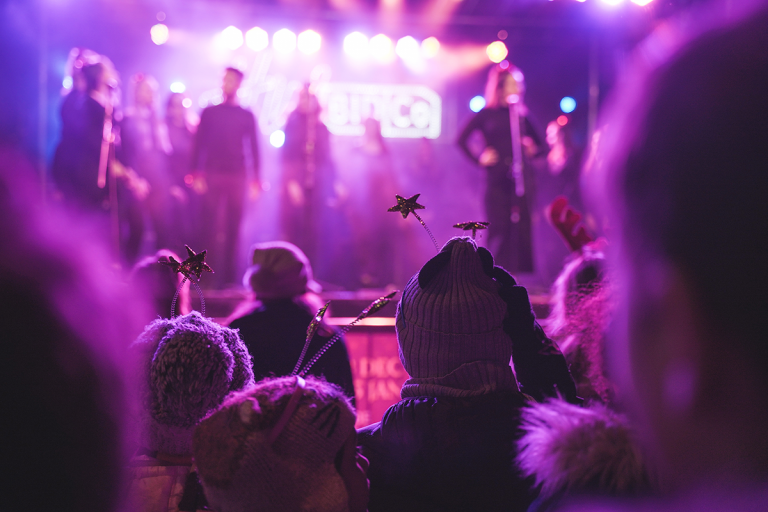 Join us for our annual Christmas Light Switch-On in High Wycombe town centre from 3pm until 8pm on Thursday 18th November.

They’ll be LIVE performances on the High Street stage, including Jackie Palmer’s Stage School and the BNU Swans Cheerleaders – plus a mouth-watering Food Truck Market, festive freebies, children’s rides and entertainment, over 25 Christmas Gift Stalls AND an appearance from a certain Mr. Father Christmas – courtesy of Wycombe Food Hub.

Our ‘Peter Pan Parade’ – led by Captain Hook’s very own 12ft Wooden Ship – will be starting its journey at 5.30pm, departing from The Swan Theatre, and sailing its way down the High Street. Featuring 100+ ‘Tinkerbells’ and ‘Pirates’ from Widmer End School, Marsh Infant School and Manor Farm Junior School, the motley crew will be intercepted by Wycombe Sound – who will be broadcasting LIVE from the event – for a rousing round of Christmas carols, before making their way round to Frogmoor.

Meanwhile in Frogmoor, the Main Stage will be getting in the Christmas swing of things from 5.15pm, with performances from 10 local dance, music and drama groups, including the Glee Club Choir, Razzmatazz, The Blend Choir, Castle Street Dancers and Duck Musik.

Just in time for the ‘Switch On Ceremony’ at 6.45pm our Celebrity ship will dock in Frogmoor, and the famous faces will head for the stage.

With great festive fanfare and Christmas cheer, the town’s lights will officially be lit, and our finale performance from WWFC Manager Gareth Ainsworth will commence until 7.15pm. But the fun won’t be over just yet, there’ll still be plenty of food, festive fun and Christmas goodies to be enjoyed back on the High Street, until the event officially closes at 8pm.

Why not come along and join hundreds of other visitors as they kick start the Christmas shopping season.

For more information or follow us on social media @hellomywycombe.